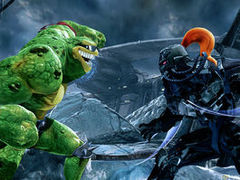 Killer Instinct Season 3 will deliver much more than a new roster of playable characters, with the team at Iron Galaxy having overhauled the graphics engine to get the most out of the Xbox One.

“We are excited to be adding several new elements to KI Season 3 that we believe really improve the overall experience, and I’m going to be speaking to the ‘Art side’ of things today,” explained Art Director, Chad Greene.

“In terms of visuals, we are adding new graphics technology; reflection tech for the stages; re-introducing screen space colour adjustments that work with gameplay; adding an all-new dynamic lighting system that provides greater realism and interaction for the characters and stages.”

Season 3 content has been created to make use of the new lighting, whilst the team has also re-lit all the stages from the first two seasons.

“As technology advances, graphics are becoming more and more powerful and the gamers have come to expect stunning visuals on today’s console hardware,” continued Greene. “Early in development of S3, we knew that we wanted to raise the bar on many levels and have a deep passion for delivering on ‘next gen’ visuals. In order to do this, we had to overhaul the tools and the pipeline and we’re really happy with the results and how we are utilizing the graphic power of the Xbox One.

“Our lighting system was very specialized, and it was time for an overhaul. We met as a team to ideate and decided to use a system that allowed us to obtain dynamic lighting for the game, but work with our existing game engine. Once in place, our stages were completely re-lit utilising the new tools while characters received updates to their lighting probes, which allows them to interact with the stage lighting. Characters now composite into the scenes in a way that is really believable – allowing for good integration/compositing while maintaining readability – especially important in a fighting game.

“We are now able to get realistic bounce and fill lighting on the characters and we are using strong rim lighting (from behind) to further pull the characters out from the background.”

Check out some comparisons over on Ultra Combo.

Killer Instinct Season 3 is set to begin in March for Xbox One and Windows 10.