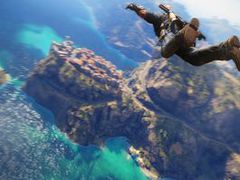 Updated on December 1, 2014 by David Scammell

Just Cause 3 developer Avalanche Studios has plans to shift some of its business towards self-publishing and “focus on doing something original” in the years to come, co-founder Christofer Sundberg has said.

“We are shifting a little bit of our focus to more self-publishing which will be quite interesting,” Sundberg explained to Game Informer while discussing the studio’s future plans. “We’re not really there yet. We had a great experience working with [free-to-play shooter] The Hunter. If you look at our financial numbers The Hunter is actually contributing quite a lot to our financial success. We’re in that fortunate position to be able to control our own destiny and having that direct connection with our players is very important to the studio. So that’s definitely where I see our future.”

Despite the shift towards independent development, however, Sundberg says that he would like the studio to “continue working” with major publishers as well.

“But on the other side we have a great partnership with Square Enix and our other publishers who we work with,” he continued, “and it’s something that we would like to continue working on as well.”

Earlier in the interview, Sundberg explained that developing original IPs would be Avalanche’s “focus for the next years to come”.

“That’s why most developers are in this business to create your own ideas,” he said. “For us it’s super important. Everybody has a lot of ideas and it takes time to get those ideas to become reality. Sometimes the ideas you might have when we pitch a game to a publisher, we can come up how we want to do this type of game. And they say well we have this license that you might want to apply that idea on, and that’s usually how it ends up. I think every developer in the world is being driven by creating your own ideas. That’s the fun part of game development, and owning that creative process and really be able to make your own dreams become real.”

“[Developing our own IP is] our focus for the next years to come,” Sundberg continued. “We have a huge catalogue of old ideas that we want to bring to life and obviously come up with a few new ones. But definitely focus on doing something original again.”

Avalanche Studios currently has two games in the works for release next year, including Just Cause 3 for Square Enix and Mad Max for Warner Bros. It has yet to announce any other projects.