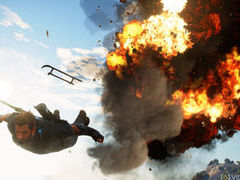 Updated on December 2, 2015 by David Scammell

A quick look on Avalanche’s careers page reveals that its Stockholm studio is currently hiring for a 3D Artist to work on an “exciting and unique high-profile unannounced title”, with other job ads pointing towards at least one of the games being an open world title.

Meanwhile, the firm’s New York studio is currently seeking a Senior Character Artist to “create and develop realistic and believable character art for AAA video game title for PS4, Xbox1, and PC platforms”, and a Tools Programmer to help deliver a “AAA next gen vehicle experience”.

“Our vision is focused on player satisfaction and on innovation,” reads the ad, “our plan is to deliver a stunning and diverse range of vehicles, in terms of handling, physics simulation and destruction rendition,”

Just Cause 3, which arrived on PS4, Xbox One and PC yesterday, was developed by Avalanche’s New York studio, with September’s Mad Max led by its Stockholm studio.

Avalanche has yet to formally announce any of its future projects beyond its collaboration with Square Enix on Final Fantasy XV, and three new DLC packs for Just Cause 3.