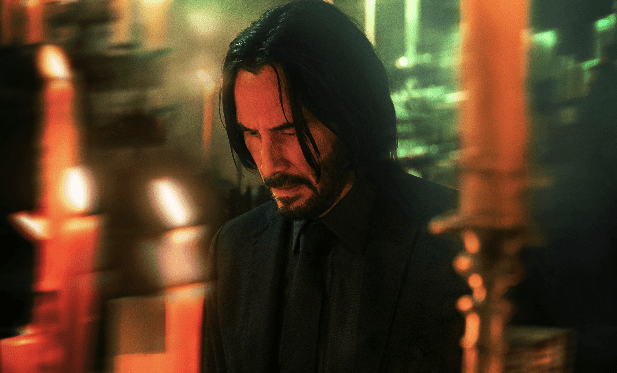 John Wick: Chapter 4 is fast approaching. We’ll only need to wait until 24th March 2023, to see Baba Yaga back in action.

So what better time to start looking at what the new movie could bring. Here’s everything we know so far.

Oh, and for those yet to the see the series, there are some spoilers, so please don’t read on if you don’t want to know!

Last we saw John, he was bloodied and beaten, lying before The Bowery King, after falling from the roof of the New York Continental hotel to escape being shot at by his old friend, Winston, The Continental’s manager.

John’s body was then found by the Tick Tock Man, one of New York’s many homeless who make up the army of The Bowery King.

Bringing John’s body to The King, we see that John, incredibly, has survived his fall, and when asked by The King if he was angry at the actions of The High Table, John replies simply “Yeahhhh”.

While the movie’s director, Chad Stahelski, has naturally remained tight lipped regarding the full plot of the movie in order to avoid spoilers, Lionsgate, who release the movies, have confirmed that:

“John Wick (Keanu Reeves) takes on his most lethal adversaries yet in the upcoming fourth installment of the series. With the price on his head ever increasing, Wick takes his fight against the High Table global as he seeks out the most powerful players in the underworld, from New York to Paris to Osaka to Berlin.”

They’ve also released the first teaser trailer for the movie which shows some of these powerful players from both sides of The High Table.

As the trailer begins with a voiceover from renowned Japanese actor Hiroyuki Sanada as new character, Shimazu, that is then revealed to be a conversation Shimazu is having with John, warning him that The Table will never stop.

From this brief glimpse and from the warnings he gives to John throughout the conversation (which plays as a voiceover throughout the trailer) it feels safe to assume that he will be one of the powerful players that John seeks assistance from.

Especially as there appears to be a history between he and John that may be friendship. As we’ve seen with past characters such as Willem Defoe’s Marcus, John Leguizamo’s Aurelio, and Halle Berry’s Sofia.

Next, we get our first glimpse of another new character to the franchise, Clancy Brown’s well dressed but as yet unknown character, as the filmmakers have kept his identity, fittingly for a movie about the clandestine world of assassins, secret.

However, the trailer does tease one key aspect of this character’s identity, that, like John, his ring finger is missing, implying, along with his presence in the lobby of the New York Continental that he may be a former assassin who, like John in Chapter 3, had to affirm his fealty to The High Table by cutting off his ring finger.

We then see the returning Charon (played by Lance Reddick), Concierge of the New York Continental Hotel and the right hand of Winston. Followed by a very brief glimpse of Winston himself (played by Ian Mc Shane).

The trailer then cuts to a striking image of a courtyard in Paris, where we are introduced to the next new character in the franchise, Bill Skarsgård’s Marquis, as he sits in view of the iconic Eiffel Tower, flanked by two menacing looking men. One of whom happens to be another new character to the franchise, martial arts movie icon Donnie Yen as Caine.

From the brief glimpses this scene and in later scenes from the trailer where we see Marquis stab a knife through the hand of Shamier Anderson’s Tracker, as well as Caine fighting John in one scene and then Shimazu in another.

It doesn’t feel like too much of a stretch to predict that Marquis is a member of The High Table with Caine an assassin who is employed as his personal bodyguard, much as Common’s Cassian was both an assassin and bodyguard of Gianna D’Antonio (played by Claudia Gerini) in Chapter 2.

We then get a very brief glimpse of singing sensation Rina Sawayama making her feature film debut as new character, Akira, as she wields a bow and arrow with devastating effect in a close quarters battle with a group of ninjas.

After some quick shots of John, we are then given our first look at Shamier Anderson’s Tracker, another new character to the John Wick universe, who appears to be an assassin as we see him in a spinning his pistol dramatically as he holsters it while walking intensely around a corner.

However, beyond this and his run in with Marquis later in the trailer. We are given no clue as to whether he will be an enemy, an ally, or possibly both.

The trailer then ends with a series of quick flashes of various action scenes including an intense gun fight between John and Caine, as well as showing a now healed Bowery King presenting John with a new suit, presumably the same style of bullet proof suit we’ve seen John wear in the previous chapters.

However, Chapter 4 is not the only new John Wick story coming next year, as there is also the three episode prequel TV series “The Continental” set to debut on the Peacock streaming service at an as yet unconfirmed date in 2023. Although, I would not be surprised to see it debut sometime between July and September of 2023.

The series is set in the 1970’s and follows a young Winston (played by Colin Woodell) as he tries to seize control of the New York Continental hotel for himself while simultaneously having to navigate his way through the criminal underworld of New York.

As Winston memorably warns The Adjudicator (played by Asia Kate Dillon) at the end of Chapter 3, his allegiances go far beyond The Continental, and I’d be very surprised if we don’t see Winston begin to build those relationships across the course of this season as well as further seasons should the show prove as popular as the movies.

Although no further plot details or trailer have been revealed yet, we do have a cast list of everyone confirmed to appear, and there are some surprising and high profile names on the list.

Beginning, with arguably, the biggest of them all, Mel Gibson as Cormac, who if I were a betting man, I would feel very confident in saying that he will be the manager of The Continental that Winston seeks to usurp.

Next, another cast member that should be very familiar to TV fans is Katie McGrath who is playing The Adjudicator, presumably a predecessor of The Adjudicator seen in Chapter 3, which also raises the question, does The High Table only appoint women as the adjudicators of their laws?

Next we have Peter Greene as Uncle Charlie, which given his name, likely means he is Winston’s Uncle, but it’s entirely possible that he isn’t Winston’s uncle and his name is in fact an Underworld moniker akin to The Bowery King or Mr Tick Tock.

The cast list also confirms that we will see a young Charon played by Ayomide Adegun. The rest of the cast then as reported on IMDB is Adam Shapiro as Lemmy, Jeremy Bobb as Mayhew, Jessica Allain as Lou, Nhung Kate as Yen, Ben Robinson as Frankie, Ray McKinnon as Jenkins, Mishel Prada as KD, Marina Mazepa as Gretel, Claire Cooper as Mrs Davenport, Hubert Point-Du Jour as Miles, Chris Ryman as Ronnie, Marsha Nicole as Mazie Assassin, Mark Musashi as Hansel.

“Art is pain. Life is suffering.”

In addition to Chapter 4, and The Continental, another live action John Wick Universe project that has been announced is Ballerina starring Ana De Armas as the titular character, an assassin seeking revenge against the people who killed her family.

Further story details are still a closely guarded secret right now but when the project was first announced around the release of Chapter 3, it was said that the lead character would be a member of the Ruska Roma, the criminal organisation revealed in Chapter 3 to have raised and trained John.

There is also no confirmed release date for the movie yet, although with shooting scheduled to have begun this summer. I’m predicting a Spring 2024 release at the latest and a Summer 2023 release at the earliest.