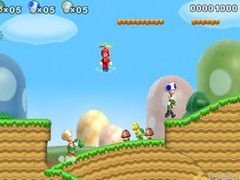 New Super Mario Bros. Wii is heading to arcades in Japan in conjunction with Capcom. The four-player cabinet includes four monitors and four sets of controls.

Rather than being a direct port of the Wii game, players earn medals by playing a series of mini-games. The trailer on the official website includes footage of the card matching game seen in the Wii original, but also other activities such as a slot machine and single-screen platforming.