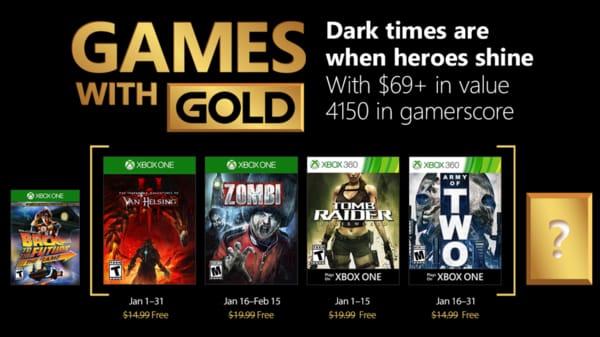 Updated on December 22, 2017 by VideoGamer.com Staff

Your first batch of Games with Gold being given away in 2018 have been announced by Microsoft as The Incredible Adventures of Van Helsing III and Zombi for the Xbox One and Tomb Raider Underworld and Army of Two from the Xbox 360.

The Incredible Adventures of Van Helsing III is being touted as the final chapter in the isometric action RPG’s trilogy, which is actually marking its release by launching straight onto the service from January 1. It’ll be joined on January 16 by Ubisoft’s Zombi, a first person zombie survival game that started off life as a Wii U exclusive entitled Zombi U in 2012 before it came to other formats a couple of years later.

Your back compatibility titles for the month will comprise of Tomb Raider Underworld, the last game in Crystal Dynamics’ Lara trilogy before the 2013 reboot to the Lara we’re familiar with today. That’ll be available for the first two weeks of the year, before it’s then replaced by Army of Two, EA’s attempt at a co-op focused third person shooter that bore a lot of similarities to Microsoft’s shooter that came out around the same time, Gears of War, that’ll be available until January 31.

As ever, you’ll need a Xbox Live Gold membership to grab these games, before they’ll change over to a new set in February, and the Xbox Wire post notes that this package is worth over $69 in value.