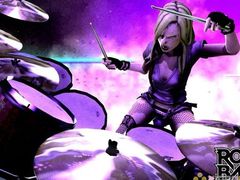 A pair of new Rock Band songs have been added to the Rock Band Music Store, but could there be more to the tracks than it first appears.

Tenacious D’s Rize Of The Fenix and Weezer’s Back To The Shack are available for 99p on Xbox 360 and PS3,

Is Harmonix suggesting its much-loved Rock Band franchise could be coming out of retirement? It’s certainly possible. If the studio is teasing now, perhaps we’ll hear more about the franchise’s possible return at E3 this summer.

The tracks are compatible with Rock Band 3 and the downloadable title Rock Band Blitz.