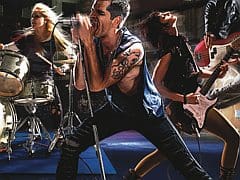 One of my main goals with Rock Band 2 was for Goretopsy, my Rock Band band, to complete the Endless Setlist II in one sitting – 84 songs played back-to-back, and a feat demanding enough to file down the buttons on any half-decent plastic guitar. It was the ultimate challenge that, sadly, I never got the opportunity to experience. Chalk it up to creative differences within the band (read: the rest of Goretopsy couldn’t give a toss), though I did attempt it solo once – I got about 40-odd songs in before my 360 crashed. I could never bring myself to attempt it again.

I’ve been jingling around to music while holding an expensive toy with colourful buttons for five years now. In that half-decade I’ve managed to get myself a degree, a (very nice – please don’t ever fire me) job, gone through multiple relationships and moved house three times. I’ve also moved slowly up from Easy difficulty to on-and-off Expert, bought six different plastic guitars and racked up a Rock Band DLC collection totalling over 5000 Microsoft Points.

I have never played a real guitar.

Enter Rock Band 3, and Harmonix intends to change all that with its new Pro mode and, assuming I have a magical bottomless wallet, a new keytar peripheral as well. Which means there are now 10 different inputs to take into consideration: Guitar, Bass, Drums and Keys have Pro modes available for each, and Vocals exist as either solo or the three-part Harmonies first seen in last year’s The Beatles: Rock Band.

Pro mode is an undoubtedly exciting addition for people seriously into music, but it also requires ridiculously expensive new instruments: a Pro guitar, with 6 actual strings, 17 frets and 102 tiny buttons, has an RRP of £124.99. The keytar has 25 keys and costs £70, and the new drums have three cymbals and an RRP of £120. Alternatively, a yet-to-be-released MIDI adapter will allow you to plug actual, genuine, expensive, real-life MIDI instruments into the game.

What that actually does to the game, well, I can’t really tell you about the Pro Guitar and Drums – we couldn’t get our hands them, although previous coverage suggests they add a lot to the game for the minuscule percentage who will want to utilise the features. Let’s be honest: due to the exorbitant costs involved, it’s likely most players are going to just play the game with their existing equipment.

The keytar, however, is a nice touch which really comes to life in Pro mode – its regular option is just a 5-key affair which feels a bit like a weak (though still entertaining) guitar you play at a different angle and without strumming. In Pro mode, however, it’s like an actual keyboard – complete with befuddling octaves and too many keys for the human mind to casually process. And it’s pretty bloody hard, too, with me only able to hit 43% of the notes (in Easy, no less) on my first attempt.

60 of the 83 songs feature support for the keyboard, which is certainly enough to get started with, though it’s a bit of shame none of the existing Rock Band catalogue has been reverse engineered to incorporate the new peripherals. It’s also worth noting that obtaining DLC tracks which support Pro mode for guitar will set you back some extra pennies.

Even forgetting the spangly new instruments, though, Rock Band 3 is still the most comprehensive update of the rhythm band shtick since the original. The novelty might have well and truly worn off years ago, but the few remaining aficionados will find themselves with a well-crafted platform to access the 83 new songs on the disc alongside the (ever-expanding) 2000+ DLC tracks and imported Rock Band 1 and 2 catalogues. Or even those Green Day tracks, if that’s your bag.

‘But Martin’, you might ask, ‘what is actually on the disc?’ There’s a return (it had to happen eventually) of Skynyrd’s Free Bird, for a start, alongside Queen’s karaoke blinder Bohemian Rhapsody and Elton John’s ivory-tickler Saturday Night’s Alright (For Fighting). For the grumpier amongst us, Slipknot make an appearance with Before I Forget, Anthrax chip in with Caught in a Mosh and, if you’re anything like me, you might decide to round that off with J. Geils Band’s Centerfold. And then play Everybody Wants to Rule the World five times in a row. There’s a bit of an overall skew towards older, synth-heavy tracks to accommodate the keyboard but it’s alright – there’s still plenty of variety for everyone.

Tangible in-game refinements strike you as soon as you hit the menu screen. The front-end has been beautifully streamlined into a stylish background vignette of your band with a simplistic suite of options laid on top – “Play Now” or “Career”, basically – and additional, individual menus for each of the four potential profiles signed into the console. Rock Band 1 and 2’s fussy profile management has been effectively done away with, and now setting up each player and their associated instrument is a doddle.

The typical and oft-repeated ‘World Tour’ format has also been pared back into something more simplistic, and now your group goes from garage band to stadium filler in the background while you play whatever you want. Each track performed in any mode earns you fans, and the game pauses to dish out amusing cutscenes whenever you hit major milestones. In short, Quickplay now has the spotlight and Career runs behind the scenes.

Harmonix should be commended for successfully tweaking the format to accommodate how people actually play the game. If my living room habits are indicative of the general populous (though I imagine mine has a slightly higher-than-average Dorito consumption), then what people want is to bang out Don’t Stop Believin’ (DLC) and The Power of Love (on the disc) instead of battling through a prescribed and arbitrary setlist. It’s an ingenious move, and a concurrent system of challenges ensures the bottom of the screen is always stacking up various accolades and accomplishments, unlocking new gear to play dress-up with the on-screen version of yourself.

Old-school style setlists are still around, however, tactfully reborn in the guise of Road Challenges. But even these are segmented into tiny chunks, allowing for both frequent breaks and to accommodate attention-strapped players who want to pop back to individual tracks every five minutes. Unless you’re playing The Endless Setlist III, but I don’t even want to think about that.

Where all this will take you, though, is almost entirely up to you. The unavoidable reality is that, for all Rock Band 3’s considerable refinements and intuitive advancements, your current games and equipment will probably suffice if you’re just after banging a few plastic keys to the odd tune every now and then. But if you’ve still got a passion for the genre, or you’re seriously considering furthering your understanding of the instruments with Pro mode, Rock Band 3 might just be the most important rhythm game to date.

If you've still got a passion for the genre Rock Band 3 might just be the most important rhythm game to date.
9 Best rhythm band title on the market Huge array of music available Pro mode is a very exciting addition Impossibly high cost