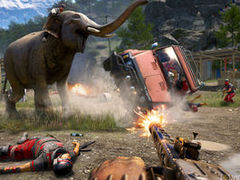 Last week, during a hands-on preview event for Far Cry 4, we asked creative director Alex Hutchinson about the intended resolution of the PS4 and Xbox One versions.

His answer, however, wasn’t entirely clear, and rather than risk misinterpreting his response, we’ve chosen to print his reply in full. Here’s what was said:

VideoGamer.com: This is the first next-gen Far Cry. What sort of challenges have you guys faced?

Alex Hutchinson, Creative Director, Far Cry 4: Luckily they’re pretty user-friendly, the new consoles, and it’s mostly just a power-differential, so the biggest challenge for us was keeping the gameplay identical on all platforms. We didn’t want people to have a worse game – like, you sort of understand if you have lower texture resolution or less hairs on the bear, but I don’t want the experience to be different so that was a big technical challenge.

Is there parity across all the systems then…?

AH: Yeah, so for gameplay, what you’re doing… There are a few more encounters on next-gen, but that’s in the emergent part, not in the core missions or any of the story.

AH: It’s 1080. I have to get you the exact numbers because it’s too technical for me which version of this it is, but yes, on both.

While it seems as if Far Cry 4 will run at 1080p on both PS4 and Xbox One, then, Ubisoft has yet to completely clarify Hutchinson’s comments, particularly when it comes to the Xbox One version.

VideoGamer.com has been in regular contact with Ubisoft following the interview in an attempt to get further clarification, but has yet to receive an official response.

Meanwhile, on Twitter, Hutchinson publicly confirmed that Ubisoft Montreal is targeting 1080p/30fps for the PS4 version of Far Cry 4, but chose not to reveal the specs of the Xbox One version.

“We will announce all PC and console specs in crazy detail very soon: no point restricting it to twitter,” he said, replying to a fan enquiring about the Xbox One version’s resolution and frame rate. “XBone looks great.”

“I would say [the PS4 and Xbox One versions look] identical but then some asshat would say a tree had one more leaf on xbone,” he later added. “So let’s say I don’t see a difference.”

UPDATE: Ubisoft has released the following statement on Twitter:

“With more than a month left until the Far Cry 4 launch the team continues to maximize the gameplay experience across all consoles & PC. We have not locked the resolution as yet but, as Alex Hutchinson notes, we are aiming for 1080p on all platforms, including PC (depending on the computer you have). We look forward to introducing fans to the world of Kyrat! Kyrat is coming soon!”