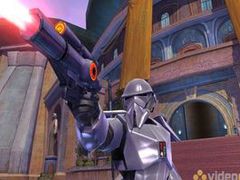 How to build a world in Star Wars: The Old Republic

The NDA has been lifted on the Star Wars: The Old Republic beta, so we spoke to senior environment artist Mike Harnisch about the game and how people have reacted to the beta so far.

Q: The NDA has lifted, how has the response been so far?

Mike Harnisch: The response I’ve seen has been positive, especially a lot of the media outlets have very positive. They’ve been putting a lot of videos online so I’ve been watching a lot of videos with the commentary which is really interesting for me to see because it’s kind of live. I get to kind of see exactly how people are dealing with things visually and technically as they go through the game.

But from what I’ve seen so far people have been very positive about it – they like a lot of the character customisation, the [cut scenes] reveals they have on each planet. I think we’ve done a really good job of being cinematic, for a game that you’re kind of moving through in a non-linear fashion. And people seem to like the combat. Everything that BioWare does, we try to put an innovative twist on it. I think the combat feels very Star Wars; even behind the scenes, if things are working in a similar way to other MMOs visually, it just feels different. And I think people are responding to that.

Q: Do you think you’ve overcome the single-player MMO label that sceptics have given you?

MH: I think so. I mean, you watch that [trailer] video that has all the features we’re putting into the game and it is just amazing to me, the scope of it. And it’s really cool because a lot of the multiplayer aspects of the game – especially the multiplayer conversation, which is essentially a dice roll as far as who gets to say certain things and how it affects your dark side and light side points – is going to be really different for fans, but it’s going to be very interactive and not just single-player. This is multiplayer stuff. And I think the PvP zones and the Operations are going to be really exciting for hardcore MMO fans. I think that people are going to go into the deeper content of the game once they go through the story.

Q: In terms of the art design was there a concerted effort on your part to make a game that didn’t just look like WoW?

MH: Absolutely. I mean I don’t want to talk about the other games, but when I came to the studio, my background was EA Chicago. I did a lot of sports-based games, I did Def Jam Icons, so I came from a totally realistic background. So coming to the studio, something that really drew me in was that the game itself has this stylised realism. I like to think of it as what very successful animation movie studios do, where they do something that’s cartoony but they put this really realistic twist on it, so the lighting and the textures feel real. I think that we went for a sort of stylised realism look.

We still have some stylised looks that I think, for the longevity of the game, are going to keep it out of the uncanny valley. I think that we avoid that really well. But I think we have given a twist that really separates ourselves from the other games that come out before. For our textures, we have superior normal-map wizards that we work with that do some really great things with lighting – but we also have some visual tricks that are a little bit different, that make it look like living concept art. As an artist and as a concept artist, that’s a high goal. And I feel from a vista stand point of the environment in particular, that we really achieved that. There were times when we would put a concept side-by-side our game shot and even our concept artist would be pretty amazed.

Q: There are a few MMOs coming out, like Guild Wars 2, that are adopting a very concept art-oriented, stylised art style. Do you think MMOs will continue in this stylistic trajectory?

MH: I honestly can’t really speak to that, but what I can speak to is when we were designing our game, we wanted to be scalable. We really wanted people who were playing on a high-end machine and people playing on a low-end machine to have a similar experience. That’s not to downgrade the people who have the nice machines, but we don’t really want to eschew the fans who don’t have great machines. So we really worked very hard to build the game in that way, and I think that’s why our characters were a bit more stylised. But we didn’t really look at other games. We looked at Star Wars, we wanted to give the Star Wars experience.

Q: Have you taken any influence from Star Wars Galaxies?

Q: What are the difficulties of creating 19 different planets?

MH: Well, we wanted variety. The challenge was we wanted to put our own take on the Star Wars universe, we wanted to create some new Star Wars experiences that you haven’t had. Like Hutta [the Hutt’s central world]. So a lot of those origins worlds are new to the Star Wars canon. I had the opportunity to work on Hoth, which is a huge deal to me being a huge fan of Empire. And we also had Tatooine, and when I saw Tatooine I was like Aah! But what we really wanted was to have its own colour palate, its own feel. Sometimes the artist would have to fight over “We want to do a night time setting!” “No this one is going to have rain!” “No this one is going to have snow!”.

But with Alderaan, one of the biggest challenges is we had this enormous planet, one of the biggest planets, and we had to cut a lot of content. As big as our game is, we cut a lot of content because we really iterated the experience the player was going to have as they play through the game. The challenge was, how do I create this incredible planet that’s not going to feel after the tenth hour that you’re just sick of it? How are we going to delineate space?

This is where having a team of senior environment artists really helps, because we have a team of a lot of people from traditional painting backgrounds. We don’t just have people who have come out of school that have only come in for video games, we have a lot of traditional fine artists. I have a degree in fine arts versus a degree in digital arts. So we were able to use that ability on a planet like Alderaan, use colour and lighting and space to really delineate space, so the Republic side feels very different from the Imperial side.

I just wrote a dev diary about this. The Imperial side feels a little bit more dead, a little bit creepy, spooky, and then the Republic side is a little bit nicer, and just feels like you’re in the alps, or the Pacific Northwest. And then we used a lot of colour to delineate. So you see that Hoth is incredibly blue, and we really put a lot of thought into those things. When people play the game they may not notice those things initially – but for me, a triple-A quality game, it’s those deeper moments, the 50th hour that you play where you notice something that you may not have noticed before. That’s something that I think is really going to separate us [from the competition], from a visual standpoint.

Q: What were things that were cut, then?

MH: It was just areas, like areas of the planet where we ended up moving space. We would say “Well, we want to move this interior here, and we want to do this, and we don’t really need this”. We were so ambitious, I think that we ended up building a lot of things that we didn’t necessarily need. So it wasn’t anything that anyone will notice when you play the game, it’s just that from our standpoint everything is our baby. So it was very difficult for us to build stuff and then to tear it down. But at the end of the day, it was that type of polish that we were really able to put onto this game visually, and it’s really going to show.

Q: At this point in the game all playable races are relatively human looking, and you haven’t seemed to adopt any of the more stylised-looking alien races to play, be it the Sullustan or even Wookies. Why was that?

MH: Well, you know, that wasn’t my background as far as making those choices from an art standpoint, so I don’t have much comment!

Q: Is there any race in particular you would want to play?

MH: I like the Twi’lek race. I like that those guys look cool, there’s kind of a Rastafarian look to them that I think is kind of cool and that’s probably what I’d play. I always lean toward light side, I always want to do good so I’ll probably go Jedi and go light side the whole way.

Q: Is there anything from the films that you’d like to play as?

MH: Well, in the films it’s Han Solo all the way – like any red-blooded American male I guess! I think the fact that we have the smuggler and we have Wookies in the game is really cool. There’s so much in the game that’s just a nod to things in Star Wars, but watching the films I connected with the human characters more than the alien characters.

Q: How is the story going to continue after users have reached max level – is there a conclusive finale?