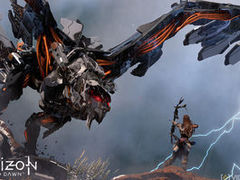 Guerrilla won’t be ‘tutorialising’ Horizon: Zero Dawn, the developer has explained, instead encouraging players to study enemy behaviour and learn how to defeat robos themselves.

Speaking to VideoGamer.com earlier today, art director Jan-Bart van Beek revealed that there is “a lot of interplay between the different weapons and ammo types, and there is a sort of creative aspect there where you need to find the right way to use weapons for particular robos. And that counts for a lot of the game. We don’t tutorialise the game, we don’t go and tell you how to hunt these robos or how they interact. You really have to go out there and explore these things by trial and error.

“And it’s the same case for learning about how the robos interact between themselves; who’s protecting who and how they are all interconnected. You’re always a little bit like David Attenborough where he’s sitting in the bushes and studying these creatures trying to learn their behaviour, seeing how you can exploit that behaviour from them.”

Guerrilla is taking a similar approach to Horizon’s storytelling as well.

“You won’t find us in any interviews explaining what the robos are, why they are there or how they came to be,” van Beek continued. “This is something for the player to find out themselves. By exploring the world, going to the ruins and learning as much as possible about our game, everything will reveal itself.”

Van Beek also provided details on Horizon’s RPG systems, explaining that throughout the game players will be able to gain XP to unlock new perks, giving them a greater chance to take down some of the larger enemies.

“There is a skill tree,” he continued. “There are two basic character development systems. First of all you’re getting XP and you can use that XP to gain new perks. So that’s the big one. One of the perks that you saw being used [in the demo] is the Precision Shot where you slow down time and that allows you to [aim] the arrows a little more precisely. Without that it’s actually really hard to hit certain weak spots. [The character in the demo] is already an advanced character about level 12, I think.

“But there’s also basically a secondary way of upgrading your character, and that is through the harvesting and crafting system. By going into nature and defeating bigger and stronger robos you’ll get better armour-plating, better weaponry and slowly but surely you’ll develop your character in a more naturalistic way.”