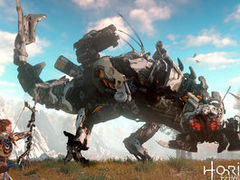 Horizon: Zero Dawn is still on track for release in 2016, according to a flyer reportedly included with French copies of Uncharted 4.

Guerrilla’s upcoming action-RPG had been rumoured to be delayed until 2017 but, according to Sony’s marketing, that doesn’t appear to be the case. The flyer (pictured below) doesn’t highlight a more specific release window, however, instead simply stating that it’s due for release later this year.

Horizon: Zero Dawn was announced at last year’s E3 and sees warrior Aloy hunting robotic dinosaurs in a futuristic wasteland. The game will be Guerrilla Games’ first new IP since launching Killzone in 2004.