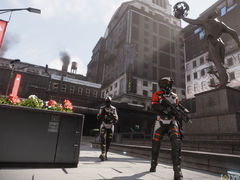 Homefront to get “further significant improvements to frame rate”

Homefront: The Revolution will see its performance improved even more when update 2.0 is release in August, Dambuster Studios has said.

The recent 1.06 update managed to claw back some performance, around a 5 fps boost on PS4 and Xbox One according to Digital Foundry, but fans can expect additional big improvements next month.

“Since the launch of Homefront: The Revolution we have released multiple patches and updates, mainly focusing on critical issues and the ‘save stall’ issue on console, but we have also achieved some performance improvements as this recent analysis by Digital Foundry shows,” reads a statement from the studio.

“Nonetheless, we are continuing to work on performance, and this is the primary focus for our next major update, 2.0, which is currently scheduled for August. This will introduce further significant improvements to frame rate, as well as additional bug fixes and reduction of save stalls down to a minimum.”

Let’s hope update 2.0 can finally get PS4 and Xbox One versions of the game running at 30 frames per second.