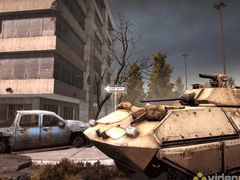 Homefront 2 is ‘phenomenal’, will be ‘5X the game’ the original was – Bilson

Homefront 2 looks “phenomenal”, according to ex-THQ Core Games boss Danny Bilson, who claims that the follow-up to last year’s near-future FPS will be “5X the game [THQ] delivered” with the original Homefront.

“I’m working very closely with [Crytek UK],” said Bilson talking to GamesIndustry International prior to his departure earlier this week.

“It’s so far phenomenal. So far. We’ve got a long way to go, the pre-production has been spectacular, I think it’s 5X the game we delivered before when it’s fully realised.”

Homefront launched to a mixed reception on its release last March, with online issues and game-breaking bugs causing havoc for THQ across its launch period.

As a result, financial struggles coupled with the game’s failure to live up to expectations forced THQ to close developer Kaos Studios.

But though Bilson admits there were “issues” in the original game’s execution, he believes that the series “had fantastic creative”, and is confident that having Crytek on board for Homefront 2 will give consumers “confidence in [the sequel’s] execution”.

“Homefront had fantastic creative,” he continued. “Arguably, at least in my opinion, one of the best properties for a first person shooter, a fresh world, great environmental storytelling and the execution unfortunately… even though I think it has some phenomenal things in that game, we sold a lot of them and it resonated with people, there were also issues around execution.

“Not that it wasn’t good, but you’re being compared to Call Of Duty and Battlefield, two of the best made games in the business. So what do you do if you’re us and you’ve got this IP you believe in, you know you’ve got the fanbase, you’ve got a million ideas, how do you solve the problem? You go to a beloved developer that we believe can bring our execution up to the level of Call Of Duty and Battlefield with our incredible IP.

“And our idea was the consumers who may have been disappointed with some of the aspect of Homefront, with Crytek applied to it, it gives them confidence in the execution with a brand that seems to have a lot of appeal.”

Besides a prospective FY2014 release date, details surrounding Homefront 2 are still thin on a ground. We do know, however, that the game will be set in a “different part of North America” to the original and will run on Crytek’s CryEngine 3.

It’s also expected to be a next-gen title, but this has yet to be confirmed by THQ.