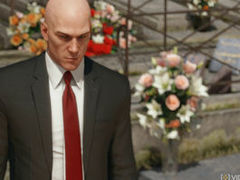 The release date for Hitman’s second episode, Sapienza, will be announced next week, IO Interactive has confirmed. At the moment, all we know is that it’s due to release in ‘April’.

The announcement will follow the release of two new Escalation Contracts rolling out for Episode 1 today, both of which task players with assassinating targets in a series of increasingly difficult scenarios.

A new ‘Vampire Magician Challenge Pack’ featuring ten new challenges is also due to release “in the coming weeks”, IO says, all of which will require players to take out their targets while wearing the Vampire Magician disguise.

The game’s Elusive Targets, however, have been delayed until next month, IO says, and won’t roll out until “closer to the planned release” of Episode Two. Elusive Targets are special one-off targets that appear in the game for a limited amount of time and give players a single chance to take them out. The first one had been due to arrive before yesterday.

Hitman’s second episode, meanwhile, will take players to a coastal town in Italy, and will cost Intro Pack owners £7.99. Full Experience owners will be able to download it for free.