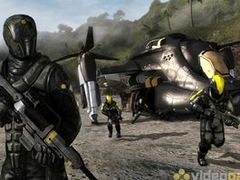 Speaking to Ripten, Haze creative lead Derek Littlewood has confirmed earlier reports that the PlayStation 3 FPS is rendered at a resolution much lower than 720p, 1024×576 to be exact. Littlewood also offered some reasons why the resolution ended up lower than the target 720p.

“We prioritise a nice smooth framerate over a different res. Personally, I don’t really buy the whole thing. People did the same with Call of Duty, they did the same with Halo, and they say with those games ‘It’s not running at true HD!’ And it’s like, I don’t care,” explained Littlewood. “If the game looks good and it runs smoothly, those are the important things to me.”

He continued: “Well, as you develop an engine you’re aiming for a certain thing, but as all the pieces slot into place, you end up realising what sort of resolution you can run it at and that’s where we ended up with for Haze.”

Look out for VideoGamer.com’s verdict on Haze this Friday.