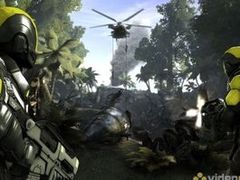 According to a new post over on the Ubisoft forums a Haze update has been released which promises to fix problems associated with the co-op campaign.

“An update is now available on the PSN to correct the difficulties encountered when inviting people into the Co-op campaign. All you have to do is turn on your PS3, launch the game, and accept the update,” explained a Ubisoft community developer.

Once installed players will need to go into Select Chapters to continue the campaign and will have to start from the beginning of the last level they reached.

Currently the update doesn’t appear to be available in Europe. We loaded up the game and got no prompt to download an update. There are also numerous Haze players on the Ubisoft forum posting to say the update isn’t available for them.

In the same thread a Ubisoft community manager also cleared up some confusion over future Haze DLC.

“While the planned DLC will include new content, there are no plans to change the graphics of the game that I’m aware of,” said the community manager.