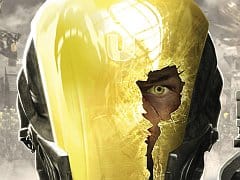 Some games rise to the occasion, managing to ride the wave of hype into gaming history, but others crumble. Haze, from TimeSplitters developer Free Radical, feels like a game crushed under the weight of expectation, a game that appears to have been frozen in time from four years ago. As solid as certain parts of the game are, no amount of nectar coursing through your veins will disguise the ugly truth that Haze is one of the most disappointing releases of the year.

Haze begins with you, Shane Carpenter, fighting as part of the Mantel Global Industries’ army, an army tanked up on a yellow liquid known as Nectar. This is administered to every soldier while out in the battlefield and paints a very different view of war compared to reality. While high on the yellow stuff you can’t see dead bodies, the world is brighter, enemies stick out as if they’re on fire and threats are seen before they happen. Essentially Nectar turns normal soldiers into super soldiers, able to take on pretty much whatever stands in their way.

Your Nectar high is lost fairly quickly though. Although you can tap L2 to administer another dose (assuming you haven’t used your supply) it’s far better to keep the high going by taking down enemies. Each successful kill replenishes your meter slightly, allowing you to remain a super soldier for as long as there are enemies to kill.

Things aren’t quite as clear cut as they sound. As with all drugs, an overdose isn’t recommended. Take too much and your vision will blur and your view of the world will change for the worst. Worst still, you’ll start shooting uncontrollably. While you can just about control this, when it happens to a team-mate you better find a safe place very quickly. The inconsistent AI soldiers have a habit of running in the line of fire, so you’ll frequently hit their Nectar dispensers causing an OD – very annoying.

It’s fair to say that the opening few levels of Haze are interesting, if not spectacular. The Nectar system makes for a game that feels different to the rest of first-person shooters on offer, and the banter between characters gives a good insight into the lives of soldiers and the politics going on. Sadly the game changes rather drastically quite early on, with you seeing the truth behind the Nectar. Seeing the error of your ways you switch sides, opting to help out the rebels of the Promise Hand in their fight against Mantel.

From here on you don’t have access to the ability enhancing Nectar, meaning what plays out is simply a rather generic, bland FPS. Instead of using Nectar to enhance your own abilities you use it against the Mantel soldiers. Lob a Nectar grenade into a group of soldiers and they’ll OD on the gas. Losing all control, they’ll turn on their own team mates, leaving you to mop up the remaining soldiers. The same goes for a knife dipped in the yellow liquid, which is deadly in the right hands. Aside from these offensive weapons, as a rebel you can also double tap jump to dodge incoming fire and press L2 to play dead – making you invisible to Mantel soldiers. You don’t really need to use the Nectar weapons, as the enemies aren’t too smart, but playing dead comes in handy every once in a while and means you’ll rarely die on the game’s standard difficulty setting.

Haze’s campaign is pretty unspectacular, lacking in spectacular moments and set-pieces that other modern shooters have in spades. Problems caused by dumb AI squad mates, instant kills from unseen rockets and unimpressive vehicle controls don’t help matters – trying to manoeuvre a buggy along a narrow road with instant death on either side isn’t fun. As original and unique as the Nectar administrating gameplay sounded, by the end of the short six-hour campaign (less if you’re at all experienced with the genre) you’ll be glad it’s all over. In fact the last level gives the appearance of being cut to pieces, with a high-speed vehicle section losing any sense of excitement because of constant fades to black to skip to slightly later moments in time.

The core gameplay behind Haze isn’t bad at all. Gun-play is solid, with the zoomed in view allowing anyone with some experience and enough accuracy to take down enemies with relative ease. Weapons feel powerful too, able to down enemies without the need to unload tons of lead. None of this matters though when you’re up against enemies that don’t seem to care about self preservation (the fact that they’re high on Nectar is no excuse). Level design isn’t great either, like the terrible missile carrier escort mission which requires you to guard the slowest moving vehicle known to man as it moves across a bridge. I dislike escort missions at the best of times, but this particular level tested my patience to near breaking point.

By far the biggest criticism I can level at Haze is how dated it feels. Nothing about the single-player campaign feels fresh once you’re through the opening few levels, with environments, gameplay and combat feeling like the games we were playing on the original Xbox and PlayStation 2. This doesn’t make Haze a bad game, but just nothing we haven’t played over and over again in the past few years. The storyline is one of its defining features, but some cheesy acting and a dodgy script often lessen the serious impact it could have had.

Haze’s potential saviour is its multiplayer functionality. The 16-player online competitive play is solid and works well online, offering plenty of game modes and an in-game friends list. You’ve got your standard deathmatch and team deathmatch as well as an object-based game mode that should offer some decent matches once the servers are full. It’s hard to see Haze’s online component drawing too many players over from CoD4, but decent sales should see it gain a strong user base.

Perhaps an even bigger selling point is the four-player drop in and out co-op online or LAN – two players are supported via split-screen. Played with real people taking the place of AI team mates the game is better, there’s no question about it. You no longer have to contend with allies running directly into your line of fire and it no longer takes two to three guys to take down a single enemy. It does make the game incredibly easy though, making it possible to run through the levels in double quick time. Had this co-op been slotted into an all-round more exciting campaign we’d be singing its praises no end, but sadly here it just makes a disappointing game a little bit more entertaining.

Much has been made of Haze’s exclusivity to the PlayStation 3, with many believing this would allow for some of the best visuals seen on the console. Although Free Radical’s game isn’t ugly, it has the look of a PC game from a few years ago, and pales in comparison to the likes of Halo 3, Gears of War and Resistance. For the most part it runs at a smooth frame rate, only bogging down during intense fire-fights, but it still disappoints considering its status as a high-profile PS3 exclusive. Little blemishes like AI soldiers repeatedly walking into walls or into fire don’t help, and on numerous occasions my checkpoint save would re-load with my character stuck in some scenery – nothing that couldn’t be overcome, but sloppy nonetheless.

Haze is far from a complete disaster but, given the high level of hype surrounding its release and the pedigree of developer Free Radical, it still stands as one of the biggest disappointments of this generation. Good ideas are there, but it all descends into a bog standard FPS before too long. Playing with friends is definitely the way to go if you can, avoiding the dodgy AI team mates as much as possible, but this can’t make up for a lacklustre campaign and underwhelming presentation. While certainly better than Turok and other severe disappointments the FPS genre has seen in recent months, Haze is nowhere near the classic slice of entertainment we originally expected.

Far from a complete disaster but, given the high level of hype surrounding its release and the pedigree of developer Free Radical, Haze still stands as one of the biggest disappointments of this gen.
6 Decent multiplayer Co-op is handled well Drab visuals Soon becomes too generic