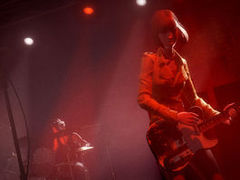 The new guitar is being manufactured by peripherals manufacturer PDP, rather than the game’s current hardware manufacturer Mad Catz, although a final release date has yet to be announced.

You can catch a first glimpse in the video above.

In addition, the developer announced an extension of its agreement with Fender Musical Instruments Corporation which will see the brand’s iconic instruments featured in the Rock Band series until 2027.

“Rock Band is all about living out your rock n’ roll fantasies, on stage, under the lights, in front of a crowd,” said Steve Janiak, Harmonix CEO. “For decades, Fender’s iconic designs and signature sound have made them the guitar and amp of choice for many of rock’s greatest stars. Naturally Fender has also been the guitar of choice for many of Rock Band’s aspiring rock stars dating back to the series’ introduction in 2007. I’m thrilled that they’ll continue to be a part of Rock Band well into our next decade.”

A new Rock Band 4 expansion pack introducing online multiplayer functionality is due to release later in the autumn.