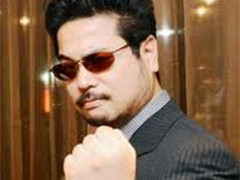 Harada kept Tekken a secret from his family for 10 years

Katsuhiro Harada kept his work on Tekken hidden from his parents for a decade over fears that they would find the game too violent.

“They were both civil servants – they served their country,” Harada said while recalling the story with EDGE. “I have two older sisters, but I was the only boy, so they had high expectations of me.

“They wanted me to work for a bank or trading company – you know, be a so-called ‘salaryman’. This work is something my parents could not understand. There was no such occupation when they were kids, and they kept telling me that they were worried about my future.”

His parents only found out that he was involved with Tekken after spotting him on the cover of a magazine promoting Tekken 5 – 10 years after the launch of the original game.

“Tekken was so violent,” he continued. “I was raised in a strict family. I studied a lot, too sport seriously, didn’t get into fights… So I told them I was working on something else. First I told them I was making Prop Cycle. Later it was Taiko No Tatsujin. I think it came out four or five years after I joined Namco. My junior staff made that game!”

Harada has worked as director or producer on every Tekken game since joining Namco in the early 1990s.