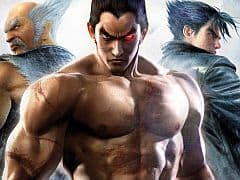 It seems difficult to criticise Tekken 6 for feeling like an uninspired effort from Namco Bandai in the same year we heap praise upon Street Fighter 4 – a fighting game Capcom is delighted to hear described as Street Fighter 2.5. But it lacks the freshness, sparkle and zing SF4 has in abundance. It lacks excitement, pizazz and spunk. It feels tired and devoid of new ideas. And yet, it’s Tekken. The one-on-one fighting is just as bone-crunching, spine-snapping and easy to learn yet hard to master as it’s always been. If it ‘aint broke…

Where does this lack of enthusiasm come from? It’s probably got something to do with the fact that this home console release is based on a two-year-old arcade game. That’s right – it’s taken two years for Tekken 6, originally released in Japanese arcades in November 2007, to land on Xbox 360 and PS3. Even the greatest games would struggle to feel fresh under such circumstances.

So, what’s new? The answer: not much. Bar some command list tweaks, the addition of the Rage system, a handful of new characters and an expanded Tekken Force mode, Tekken 6 is Tekken 5: Dark Resurrection. All the usual suspects are faithfully reproduced: the four button combat (each button is assigned to a limb), the counter system, tech rolling, wall hits, foreground/background dodging, and the reliance on air combos following launchers. This is sure to please many fans, but will do nothing to budge long-standing critics.

Let’s start with the Rage system. When you’re nearly dead your health bar flashes red, your character glows and your strike attacks do more damage. That’s all there is to it. It’s a disappointing feature – it does little to change the dynamic of a match. Sure, it might make you slightly more weary of your opponent, but at the end of the day little changes. It doesn’t make available new, ultra powerful moves, or make you more resistant to attacks. The overall impact on strategy is minimal.

Far more important for high level players is the new “bound system”. Every character has a number of moves that, when used during a mid-air combo, will “bounce” the opponent off of the ground and back into the air, resetting the juggle potential. For a game based on air combos, this is huge, and has already sparked much heated debate among the Tekken community. The main gripe seems to be that it is overpowered – calls have already been made for a reduction in juggle damage. Technically it extends even further the number of attacks a player can land before the opponent has the chance to tech roll out of a landing. It’ll be interesting to see how it pans out, especially online.

For the more casual Tekken fan (aka the button-bashing Eddy player), however, the bound system will go largely unnoticed. You might find yourself accidentally connecting with a bound move, in which case you’ll no doubt feel incredibly happy with yourself. But without ace timing and a mastery of a character’s combo set, it’ll be a rare occurrence.

New to the console versions is the “Scenario Campaign”. Remember Tekken 3’s Tekken Force mode? You know, the rubbish Final Fight in 3D afterthought that clumsily dropped the fighting game controls from the one-on-one mode into beat-em-up-style stages? Sure you do. Well, Scenario Campaign is that, in high definition, with guns, and a co-op partner, but it’s just as rubbish.

Scenario Campaign is astonishing in many ways. It begins with a lavish, eye-catching animated account of the entire Tekken series, taking in Tekken right up to Tekken 5: Dark Resurrection. It’s a wonderful effort, displaying the kind of production values SF4’s laughable animes only dreamt of. It’s the best kind of fan service, but crystallises Tekken’s plot as the nonsensical Greek tragedy it truly is. If there was an award for the most dysfunctional family every to grace not just video games, but entertainment, surely the spiky-haired Mishimas would win it.

It’s all downhill from there, though. Via some silly, very Japanese Metal Gear Solid-length cutscenes, all using the in-game engine, a story of sorts unravels. New character Lars Alexandersson – the emo – bangs his head and loses his memory while infiltrating the Mishima Zaibatsu. Then it’s on to the mode proper, in which you battle waves of generic enemies in inane stages with only clunky, frustrating and fiddly controls for company. The camera’s a git, the targeting system’s a joke and the environments are dreary – as they were in Tekken Force. Unlike Tekken Force, however, you can pick up and use weapons, like gatling guns – a first for the series – and fight huge, screen-filling robots. They do little to improve matters, though. Some will love Scenario Campaign. Obviously, I do not.

Fans of the traditional Tekken experience will be pleased to learn that “item moves” (character specific moves that use items equipped in the customisation mode) hardly affect the one-on-one game at all. In fact, they’re more like elaborate taunts. Some fans had been concerned that Brian Fury shooting a shotgun, Bruce unleashing baby chicks, Asuka using a fan and Paul growing his already spiky blonde hairdo even longer, for example, would be game breaking abilities. Thankfully, item moves do so little damage that they’re almost inconsequential. Expect opponents to bust them out online, though, just to take the piss.

Of more consequence are the improvements made to character customisation. You can still dress your favourite Tekken character in ridiculous outfits, change the hairstyles and equip accessories (expect to see some abominations online) as before, but now even more parts of a character can be equipped. While it’s never been my cup of tea, fans should find much to fuss over here.

The six new playable characters are largely successful, and bring the total roster to an eye-watering 40 (picking out your character of choice from the tiny mug shots on the player select screen exercises those eyeballs). Bob, a grossly overweight American, is surely a dig at US consumerism (as was SF4’s Rufus). He’s surprisingly fast and well animated: his karate moves are satisfying and powerful. His massive popularity in arcades should translate to the online arena, where I’m sure he’ll quickly establish himself as top tier.

Zafina is another new character who should prove popular, not least because she’s gorgeous and the spitting image of Casino Royale starlet Eva Green. Her fighting style is a mesmerising combination of spider-like movements and stiletto jabs. She’s got a number of stances, too, which add depth to her repertoire. I found her a tad slow for high level play, but by all accounts she’s worth the time to master.

Other new additions fall flat. Alisa Boskonovitch, a cyborg with jet wings, chainsaw arms and a head that can be detached and thrown as a grenade, seems at first overpowered but upon closer inspection lacks the essential Tekken tools to ensure long-term usefulness. The aforementioned Lars is yet another Mishima clone, but less useful than his kin. The feminine Leo (is it a boy or a girl?) and matador Miguel (like most video game Spaniards, he’s a bullfighter) are destined, unfortunately, for fighting game obscurity.

As a fan who adores Tekken’s superb fighting game system, I can excuse Tekken 6’s lack of innovation more readily than others. This is the crux of the matter: if you love Tekken, there’s nothing particularly wrong with Tekken 6. It’s just that it builds upon the return to form that was Tekken 5: Dark Resurrection (the less said about Tekken 4 the better) so slightly that it’s hard to see that it has done so at all. It has the fundamentals down: online play; an impressive set of offline modes including arcade, time trial, survival, practice and ghost; loads of customisation options and, though it pains me to say it, fan service via Scenario Mode. It’s got everything required to pass, but nothing required to excel. The graphics are starting to look dated (is noticeable clipping acceptable on Xbox 360 and PS3?), the additions to the system mechanics are uninspiring, the loading’s abominable, and it’s all too familiar. Even the menus bore.

This does not make Tekken 6 a bad game. It just makes it a tad disappointing. It still soaked up hours of my time as I wrestled with the changes the development team made to my go-to characters: Ling Xiaoyu, Paul Phoenix, Lei Wulong, Asuka Kazama and Heihachi Mishima. Newcomers will still find the game accessible (more so than almost every other fighting game on the market, including SF4), and might even enjoy spectacular success, especially with characters with special moves receptive to button bashing. And veterans will still find the nuanced fighting system rewarding to master and, essentially, pixel perfect. But in a year destined to be remembered as the one that saw the resurgence of the fighting game, Tekken 6’s star is too dull to shine brightest.

In a year destined to be remembered as the one that saw the resurgence of the fighting game, Tekken 6's star is too dull to shine brightest.
8 Loads of game modes It's Tekken! Starting to feel tired Lack of innovation