Halo Infinite toy might have leaked a major plot point

To Infinite and beyond

A Halo Infinite toy might have revealed a major plot point for the anticipated Xbox Series X game (via Inverse).

Spoilers abound, so stop reading now if you don’t want to know anything about the story of Halo Infinite.

So, there are a set of Halo Infinite toys from Mega Construx (the website is suddenly down for maintenance, but not before Reddit user Kittyrules808 snapped a screenshot).  The toys feature Master Chief and three other characters, two of whom are aliens. One of them is a nondescript Covenant Grunt but the other alien is sparking speculation to the story of Halo Infinite. This character is a Brute, holding a Gravity Hammer and wearing the helmet of Spartan Jameson Locke on their armor. 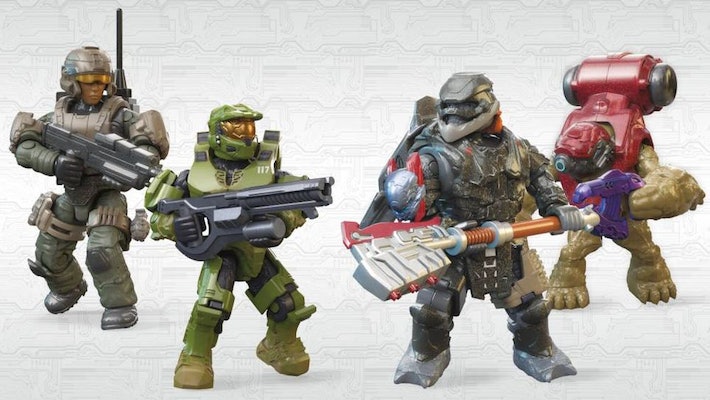 Now, this character looks like the brusque and scary sort. I don’t imagine that Locke has freely given his helmet away to this alien. Nor do I assume that featuring Locke’s helmet on their armor is a sign of inspiration or respect. It seems to me and a lot of other Halo fans that this alien has killed Locke, either before the events of Halo Infinite, or in the game itself.

It could also be a case of a lost belonging. Locke plants his helmet somewhere, and he’s like, “I’ve got no clue where that’s gone.” Then, this Brute character shows up and they’re like, “This is yours? I had no idea! Here you go, old chap,” and everything is fine. That isn’t very probable though, and it’s a shame if Locke does meet a grisly end in Infinite. Later today, there will be an Xbox Series X showcase which will feature a “new look” at the game’s campaign.

Halo Infinite will launch in holiday 2020 for Xbox Series X.