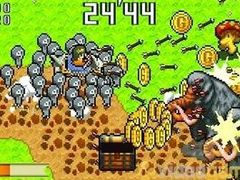 Rising Star Games has announced that February 4 will see the release of a Half-Minute Hero playable demo, available to download from the PlayStation Store.

The ‘Hero Mode’ demo is a cut down version of the full game, allowing players to sample a selection of missions from the final game, each said to showcase a different type of challenge.

“We’re really excited about the release of Half-Minute Hero, truly the most innovative game on the PSP today,” said Martin Defries, managing director, Rising Star Games. “Those who can’t wait until launch day should head to the PlayStation Network to download a demo of Half-Minute Hero, which contains three exciting levels from the game.”

Half-Minute Hero, from developer Marvelous Entertainment, features a unique take on the classic RPG genre, challenging players to save the world in just 30 seconds.

The full game is scheduled for release on February 12, 2010, exclusively on PSP.

Challenges players to save the world in just 30 seconds.

Challenges players to save the world in just 30 seconds.