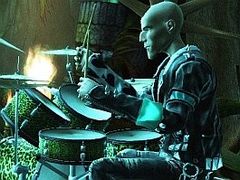 IGN reports that Activision and developer Beenox have confirmed the June release of Guitar Hero: Greatest Hits for Xbox 360, PS3, Wii and PS2.

The package will feature 48 master recordings taken from Guitar Hero, Guitar Hero II, Guitar Hero Encore: Rocks the 80s and Guitar Hero III. Since the debut of many of these songs much has changed in Guitar Hero, and thankfully Activision will be including all the latest features in Greatest Hits.

The compilation will feature eight player online battle of the bands, the Guitar Hero Music Studio, GHTunes, the Rockstar creator and a career mode. The tracks have also been updated to offer the Expert+ difficulty mode found in the upcoming Guitar Hero: Metallica.

Eight songs from the game’s track list have also been announced:

Alice in Chains – “Them Bones”

Dragonforce – “Through the Fire and Flames”

Joan Jett and The Blackhearts – “I Love Rock N Roll”

Poison – “Nothin’ But A Good Time”

Rage Against The Machine – “Killing in the Name”