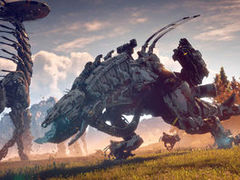 Guerrilla cancelled work on a second project to focus on Horizon: Zero Dawn

Guerrilla cancelled work on a second project it had in development to focus on Horizon: Zero Dawn, game director Mathijs de Jonge has revealed.

Speaking during a new video posted by Game Informer, de Jonge revealed that the studio had been working on prototypes for two new games it had considered developing for around six months: one being Horizon and the other being a second unannounced title.

The two games were shortlisted from over 30 ideas that had been put forward by different members of the studio. But after listening to feedback, it was decided that Horizon should take the lead.

“We started out with a smaller team to look into exploring what those concepts would mean if we were to develop them,” de Jonge explained. “At some point we took two forward, worked on those prototypes for like, half a year or so. And we did some testing with some external people from Sony that are not in our office, and internally as well, and it was kind of 50/50 at some points.”

He continued: “We actually put all the feedback that we got into an Excel sheet. And we had these two graphs: What excites you most and what do you think is the most risky one? The project that [stood] out on both charts was Horizon.”

“It was certainly not the least risky, but definitely the one where everybody that saw the original pitch, they said, well, we gotta make this,” added managing director Hermen Hulst. “This is maybe incredibly risky but it’s something that is so radically different and so inspiring that it actually took me very little time to convince the team to jump behind it. We wanted to make [Horizon] straight away.”

De Jonge continued: “This is an action RPG. Open world. We didn’t have any tools, we didn’t have an engine that supported open world. At the same time it was such an exciting concept, so we cancelled all work on the second project and continued just on Horizon.”

While Guerrilla doesn’t say what the second project was, it may have been a new title in the Killzone series, a franchise the developer has been involved with since 2004. The last game in the series released alongside PS4 in November 2013.