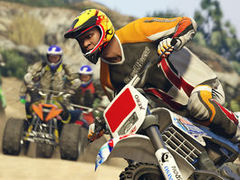 Rockstar’s parent company Take Two Interactive has admitted that it “misspoke” during an earnings call earlier this week when it claimed that it had not previously discussed plans for story mode DLC for Grand Theft Auto 5.

In a message to Game Informer, Take Two’s VP of corporate communications and public affairs acknowledged that “Strauss [Zelnick, CEO] misspoke during today’s call, as over a year ago Rockstar Games had said that they were exploring story mode content for Grand Theft Auto V”.

No further information on the content was provided, however, and it remains unclear when the content may release.

Earlier this week, Strauss Zelnick denied that Take Two had ever discussed DLC for GTA 5’s story mode, telling listeners: “No, we haven’t discussed any story-based downloadable content. We did talk about the Heists and they’ve been released.”