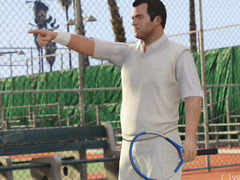 PC gamers can put away the party poppers. GTA 5 may not actually be coming to PC after all.

Yesterday it was reported that Nvidia had let slip that GTA 5 was coming to PC this autumn, but the technology firm now says it doesn’t actually have any information on a possible PC release.

“Please note, during our Thursday’s earnings call, our investor relations team provided a list of important games that gamers are looking forward to on PC this fall, and included Grand Theft Auto V on that list,” reads a statement from Nvidia provided to VideoGamer.com.

“This statement was made with the intent of expressing enthusiasm for the games industry in general, and was not intended to represent specific knowledge possessed by NVIDIA. NVIDIA does not have information on any possible PC version release of Grand Theft Auto or its availability. We deeply regret the error.”

Though Rockstar has yet to officially announce a PC version of GTA 5, a PC port has long been rumoured.

A job ad for Rockstar Leeds spotted last month asked for new developers to “help bring our latest titles to the PC platform”, and the game has previously been listed by multiple online retailers.