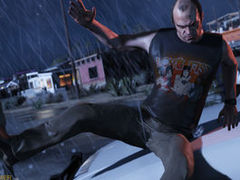 GTA 5 on Xbox One and PS4 may happen ‘in the future’, Rockstar suggests

GTA 5 remains a possibility for Xbox One and PS4, but the current focus remains on getting the current-gen version into stores, Rockstar Games has said.

Asked how Rockstar will handle the gamer transition from current to next-gen platforms, Benzie said: “We already have plans for what the next world holds in terms of missions, new content, clothes, apartments, for the next while. But we really want to see what people are playing, and we’re putting a lot of effort into the back end, so we can keep an eye on exactly how long people are spending in deathmatches, races, and all the other modes – just to see what they’re doing. And if we see any peaks anywhere, then we know where to concentrate our efforts.

“There’s not a lot of data out there for us. There’s very few games like GTA Online – so we’ll play it by ear and see what the consumers want.”

Asked again about next-gen, he added: “We’ll get the current gen version out first and see what happens in the future.”

And if you are picking up a current-gen version, Benzie says there’s nothing between the Xbox 360 and PS3 versions.

“This is probably the first game we’ve done where both platforms have been running in parallel,” he explained. “There’s very, very little difference in the development state of them both. They’re both very similar. It would be hard to tell them apart.”

GTA 5 will be released September 17, followed by GTA Online on October 1.

Read what Steve thinks GTA Online must have.