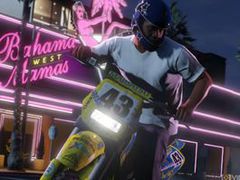 Grand Theft Auto 5 “has the potential to reach the week one summit” and possibly break opening week sales records in the UK, GfK Chart-Track director Dorian Bloch has suggested.

The record is currently held by 2010’s Call of Duty: Black Ops, which sold 2m units in the UK during its launch week and recorded £58m worth of sales on its first day.

But GTA 5, which goes on sale in September, could out-perform it, Chart-Track suggests, despite the imminent release of next-gen consoles and an overall decline in the UK boxed games market.

“Assuming both new formats arrive with stock for Q4 and a decent range of 15 to 25 titles, I would view the overall market for software, hardware and gaming accessories to be within a single digit decline over last year,” Bloch told MCV.

“Overall console hardware units could match 2012 and the gaming accessories market will certainly show growth. There will be an as yet unknown trade-off between early adopters for Xbox One and PS4 and those that stick with 360 and PS3 software”.

He added: “Grand Theft Auto V has the potential to reach the week one summit. This is currently Black Ops with 2m units sold.”

Retail sources have said that Rockstar is readying a huge day one allocation of three million GTA 5 units for the UK.