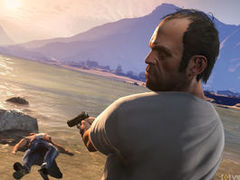 The PlayStation 4, Xbox One and PC release of Grand Theft Auto 5 has not been delayed into 2015, Rockstar has confirmed.

A rumour on VG247 earlier this week suggested that the game may have been pushed back to next year, but in an update on Rockstar’s support site yesterday, the publisher confirmed that the autumn release date “has not changed”.

“I’m also looking forward to the PC release, however this release date has not changed,” wrote Rockstar support (via NeoGAF). “Please see our support article, ‘Grand Theft Auto V Release Date on PlayStation 4, Xbox One, and PC’ for the most recent information on this topic.”

Rockstar’s comments coincide with a post from Non Stop Pop FM host Cara Delevingne last night, who revealed that she had returned to Rockstar to “update [her] GTAV radio station” for the next-gen versions. She also reiterated a “fall” release date.

Earlier this week, GAME stated that it had received a “provisional” November release date for GTA 5 on PS4 and Xbox One, but later apologised for any “confusion”. Officially, the game is still on track for release this autumn.