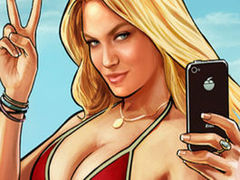 UPDATE: It’s time! Rockstar has released the first gameplay footage of Grand Theft Auto 5 – and you can see it for yourself in the video above.

The 5 minute trailer offers the first look at GTA 5’s gameplay, exploring the sun, sin and sand of Los Santos.

But there’s a lot to take in, and if you think you’ve spotted something hidden in the trailer or want to share your thoughts on the footage with the rest of the VG team, leave us a comment below.

Hyped for GTA 5? Head through to our first GTA 5 Essentials feature to find out what we hope to see from the game’s vehicles and multiplayer, or have a listen to our impressions of the game’s hands-off presentation earlier this year.

Alternatively, you can check out Simon, Matt and Chris’ reactions to the gameplay trailer in the video below.

ORIGINAL STORY: Rockstar is set to release the first ever gameplay footage of Grand Theft Auto 5 at 3pm BST today.

At 3pm today, the video above will be replaced by the brand new gameplay footage, where we’re expecting to see more of Los Santos than we’ve ever seen before.

Rockstar’s yet to confirm exactly what will be shown off in the trailer, and we still aren’t sure whether the publisher will be revealing more of GTA 5’s single-player or offering the first glimpse at the game’s multiplayer, Grand Theft Auto Online.

But whatever it is, make sure to bookmark this page and head back here at 3pm BST for an unmissable first look at GTA 5’s gameplay.

While you’re waiting, check out the first of our GTA 5 Essentials features, which begins by looking at vehicles and multiplayer.