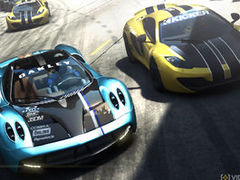 Available today for £4.79, the Sprint Pack promises to deliver “hours of single-player and online gameplay”, and features a series of new Sprint Championships set across Hong Kong, Okutama, Cote d’Azure and the California Coast.

“The Sprint pack comes with the aptly named Sprint Game Mode, which sees each competitor released one by one to set a time down a point-to-point track,” says Codemasters. “The fastest time at the end of the event wins.

“As you race down the track you’ll be given split intervals to keep you updated on your progress. Sprint is only available for point-to-point tracks, but should you wish you can take the challenge online.”

Two further ‘mini-expansions’ – the Touring Car Legends Pack and Drag Racing Pack – are due for release by October. For a look at the new Sprint mode in action, take a look at the video below.