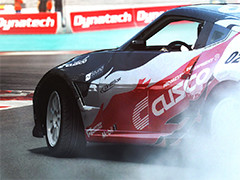 UPDATE: Codemasters has formally announced GRID Autosport, confirming a June 27 release on Xbox 360, PlayStation 3 and PC. The game will not release on PlayStation 4 or Xbox One.

Discussing the new title on Codemasters Blog, community manager Ben Walke said that GRID Autosport “aims to move the series back in line as a more authentic racing game” with the game created off the feedback received following the launch of GRID 2.

“With GRID Autosport we had the opportunity to make a much more focussed motorsport game, a desire that many of you have expressed directly to us, and a game that in spirit goes back to some of our earlier titles in terms of content and handling,” added Walke.

Autosport’s career mode will see players competing across five different disciplines as they move up the ranks to become a professional racing driver. The cockpit view is back, too, as is an “authentic handling model”.

“We’re incredibly excited to lift the lid on GRID Autosport and we’re looking forward to the coming weeks and months,” concluded Walke. “We’ve got a regular flow of new information and content coming your way and all of it starts tomorrow when we reveal our first team which sees the return of some old friends…”

ORIGINAL REPORT: GRID Autosport, the third title in Codemaster’s GRID series, will release on Xbox 360, PlayStation 3 and PC on June 27, according to a report on BrasilGamer. The game does not appear to be heading to PlayStation 4 or Xbox One.

BrasilGamer claims that Autosport features “the largest amount of content” in a GRID game so far and offers “a truly authentic feeling of the sport”, featuring five styles of driving and over 100 routes.

Head through here to check out the first alleged screenshots.

Codemasters has yet to formally announce GRID Autosport but teased last week that it would be revealing a new GRID title today.