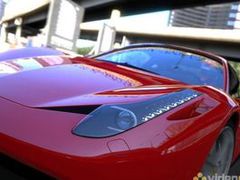 A PlayStation 4 version of Gran Turismo may have been inadvertently outed by an Italian automobile company.

Photos of photographers – presumed to be Polyphony Digital devs – taking snaps of a racing car were uploaded to LM Gianetti’s Facebook page last night in an album titled “SCANSIONE PER GRAN TURISMO PS4”, which translates to “SCAN FOR GRAN TURISMO PS4”.

The album title was later changed to “Scanning”, and following that deleted altogether.

Judging by its website, LM Gianettia appears to specialise in providing special parts for racing cars and bikes.

Sony has yet to announce a Gran Turismo title for PS4.

However, comments from a Sony exec last month suggested that Gran Turismo 6 could be headed to PlayStation 3.