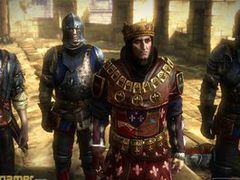 GOG.com has announced it will be celebrating the holiday season with a host of sale prices and special offers, starting on December 8 and continuing until January 2, 2012.

Kicking off the festive deals on December 8 will be The Witcher 2, available for just $23.99 until midday on December 10. Buy The Witcher 2 and you’ll also get The Witcher: Enhanced Edition for free. This is the best price that GOG.com will have on the Witcher franchise for the entirety of the holiday season.

GOG.com will also be giving away hundreds of game codes for a variety of PC classic titles on both Saturday December 10 and Sunday December 11 through social media channels and on their website.

Starting December 12 at 12:00 GMT GOG.com will be having a 48 hour giveaway of Empire Earth: Gold Edition where anyone can add it to their account for free!

And finally, GOG.com starts its holiday sales on the December 12, and will be having a “50% Off Holiday Celebration” on virtually every game in the catalogue from then until January 2, 2012.