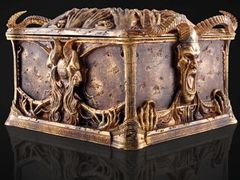 The set will be available in limited quantities in most European countries, Australia and New Zealand at the same time as the standalone God of War III game. Pricing details and an exact release date will be confirmed in the next few weeks.

The limited edition set will come in a “high-end, sculpted replica of Pandora’s Box” including the following items:

– God of War Collection (gentle reminder, this is God of War and God of War II, remastered in HD, running at 60 fps, with Trophy support, all on one Blu-ray Disc)

— God of War: Unearthing the Legend Franchise Documentary. This is a full-length documentary detailing the history of the God of War franchise. A must have for fans!

— God of War Trilogy Soundtrack – God of War, II, and III scores from the game

Those wondering what’s happened to the release of the standalone God of War Collection; Sony says to keep an eye on the official PlayStation Blog.