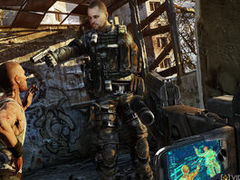 Get Even to be published by Bandai Namco in 2016

Bandai Namco has partnered with The Farm 51 to publish upcoming first-person action game Get Even, the publisher has announced.

The game will be released on PS4, Xbox One and PC in 2016, and promises to “blur the lines” between single-player and multiplayer with an online mechanic that allows players to join other users’ single-player campaigns as enemies.

The mechanic, the developer says, will mean that players “never know whether their opponents are human or CPU-based”.

“We’re pleased to be working with Bandai Namco Entertainment to publish Get Even globally,” said development director Wojciech Pazdur. “We are convinced that they are deeply committed to help us make this game a unique experience. Not only will Bandai Namco publish Get Even, but they are also helping us on a production level and fully support our vision of the game. We believe Get Even is an innovative landmark in the FPS genre and expertise provided by Bandai Namco will be a very important factor in helping us realize its potential.”

Bandai Namco, meanwhile, says that the game will be one of its “key titles in the upcoming year”.

“With its movie-like approach and its mature and intimate story, all players should keep an eye on this game!” the publisher said.

Get Even was first announced by The Farm 51 in January 2014, although little has been seen since. The developer previously created 2013 shooter Deadfall Adventures and Painkiller remake Painkiller: Hell & Damnation.