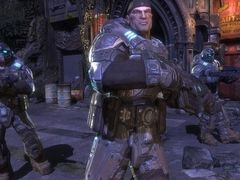 NECA, a worldwide leader in the design of Collectors toys, has announced that our favourite Gears of War characters will be getting the action figure treatment very soon. The first wave of releases will include Marcus Fenix, Augustus Cole, and the villainous Locust Drone.

The figures will be modelled precisely on the in-game models and will include accessories featured in the game. Considering Gears of War has become one of the Xbox 360’s most successful titles since its release late in 2006, we’re sure a lot of people will want to experience Emergence Day on their desks.