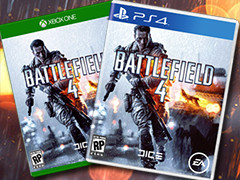 GAME has announced details of a new trade-in program offering customers the chance to upgrade their current-gen titles to the next-gen equivalent for a reduced price.

The offer guarantees a minimum £40 trade-in value for a range of PS3 and Xbox 360 titles, including FIFA 14, Battlefield 4 and Call of Duty: Ghosts when upgrading to the PS4 or Xbox One version.

It isn’t yet clear whether the offer will extend to other cross-gen titles, or how much customers will need to pay on top for the upgrade. GAME’s website currently lists the next-gen versions of all three titles at £49.99, but prices may be different in-store.

The promotion is similar to the offer announced by GameStop last month, which guarantees a minimum $50 trade-in on similar titles, and the PS3 to PS4 upgrade offer due to be available on PlayStation Store.

PS4 launches in the UK on November 29. Xbox One releases in November but has yet to be dated.