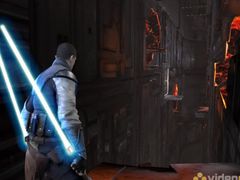 All future Star Wars video games will form part of the franchise’s canon, Lucasfilm has confirmed.

The new movie trilogy, along with games, books comics and more, will be coordinated under the newly formed story group headed by Lucasfilm president Kathleen Kennedy.

“We have an unprecedented slate of new Star Wars entertainment on the horizon,” said Kennedy. “We’re set to bring Star Wars back to the big screen, and continue the adventure through games, books, comics, and new formats that are just emerging. This future of interconnected storytelling will allow fans to explore this galaxy in deeper ways than ever before.”

EA has Star Wars games in development at DICE and Visceral.

It was also confirmed that the only Star Wars canon are the existing six Star Wars movies, and the Star Wars: The Clone Wars animated series. All other content forms part of the Extended Universe.

The first new canon on screen will be the animated series Star Wars Rebels.