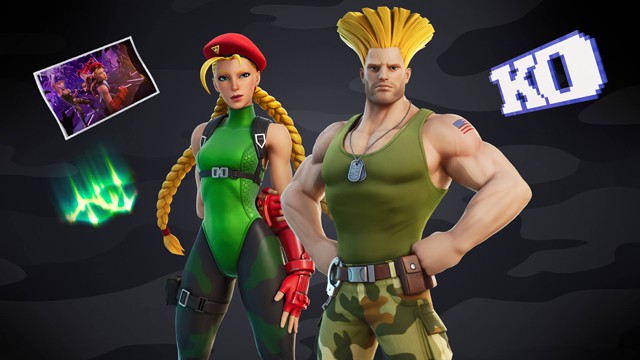 Epic Games and Capcom are teaming up to bring Cammy and Guile from Street Fighter into battle royale shooter Fortnite.

Both characters will be available in the Item Shop from this Saturday, August 7. Guile will have two variants, with his classic green fatigues costume and a beach-ready ‘Glistening Guile’ variant and KO Back Bling. Cammy meanwhile has her own classic outfit given a Fortnite tweak, a Tactical Cammy Variant and a Borealis Backer Back Bling.

You’ll be able to get your hands on both Outfits, Back Blings and a Round 2 Loading Screen together in the Cammy & Guile bundle. It’ll also include Guile’s Knuckle Buster Pickaxe, Cammy’s Delta Red Bowie Blade Pickaxe and a V-Trigger Vector Glider that’s inspired by Guile’s airbase stage from Street Fighter.

If you feel up to the challenge, you can also win the Cammy Outfit and Borealis Backer Back Bling in a Duos Tournament taking place before the pair hit the Item Shop. On August 5, the Cammy Cup will see pairs duking it out against each other, with the top performing teams getting the Cammy skin and Back Bling, while any team that earns 8 points or more will get the Round Two loading screen for their troubles.

Cammy and Guile from Street Fighter arrive in Fortnite on August 7. That’s slap bang in the middle of the recently-announced Fortnite Rift Tour concert. That live event will including a performance by one Arianna Grande.

Announcing two new challengers! Guile and Cammy from @StreetFighter are making their way to the Island.

Read about their upcoming Cosmetic Sets and about the Cammy Cup where you can win her Outfit early.