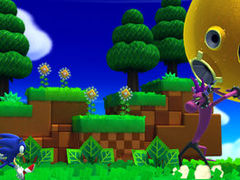 Sonic: Lost World, the Wii U exclusive Sonic platformer, will launch for Steam on November 2, SEGA has announced.

The game was released for Wii U in 2013. The PC port will feature full controller support, Steam Achievements, Cloud Save, leaderboard functionality, interchangeable keyboard prompts, and widescreen and high resolution implementation.

In addition, the Nightmare DLC will be included in the £19.99 price. Furthermore, pre-purchase and you’ll get Sonic and All-Stars Racing Transformed free.

“We’re delighted to be able to bring Sonic Lost World to PC,” Said John Clark, VP of Commercial Publishing for SEGA Europe. “This is the latest in a string of high quality PC ports of past SEGA titles that we will be building on in the coming months and years.”