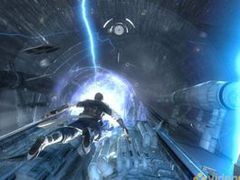 The first DLC for Star Wars: The Force Unleashed II will see players take Starkiller on a bonus mission to the forest moon of Endor.

Events will unfold during the time period of Return of the Jedi, but give players an alternate look at the epic battle from Empire Strikes Back in a “what if?” scenario. Ewok fans will also be pleased to hear that they’ll be up for a battle.

The mission will also feature new Achievements and trophies and is described to be comparable in length to the bonus missions released for the first game.

And although the action takes place in what LucasArts is calling the “infinite universe,” Starkiller will have the same abilities as he does in the main Force Unleashed II campaign.

Star Wars: The Force Unleashed II Endor will be released later this year. No price has been announced.

Given the brevity of the main Force Unleashed II game – approximately five hours – asking gamers to fork out extra money for more content so soon after release isn’t likely to go down well.

Gamers yet to pick up the game – perhaps waiting for a price reduction – should also remember that the first game received a “Sith Edition” throwing in all the post-launch DLC and original game into one package.