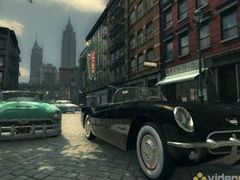 2K Games has announced that Jimmy’s Vendetta, the second DLC add-on for Mafia II, will be released on September 7 for Xbox 360, PS3 and PC.

Priced $9.99/800 MS Points, Jimmy’s Vendetta takes players into an alternate perspective of the mob through the eyes of Jimmy, the guy the other guys call when they need to finish the job.

Players will get their hands dirty helping Jimmy clean up other people’s messes as they deal with the Italian and Irish mobsters that reside in Empire Bay. As players progress, new quests are unlocked, including assassination and timed vehicle pursuits ending in shootouts and explosive car chases.

The arcade-style action will reward players for executing with deadly head shots or charged explosives, and rack up points for precision-timed power slides, lofty jumps, and fast driving. Multipliers and combos add bonus points to overall scores that will be posted to the new online leaderboard system.