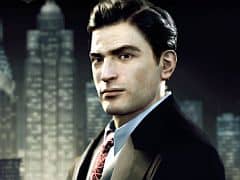 With Mafia 2, developer 2K Czech has created a game with the atmosphere of Goodfellas and characters that are fun to spend time with, but somewhere in development the studio forgot that gamers generally want to do things they can’t do in real life. For a lot of game’s 10-12 hours lead character Vito does, for want of a better term, odd-jobs – and not the kind that require guns. He acts as a taxi driver, a warehouse worker, a sales assistant, a money collector and more, but in a game about the mafia, most of us want to be doing the exciting stuff. The rise of Vito is handled well in terms of believability, but as a game Mafia 2 lacks spark.

Vito starts his epic story fighting in WWII before returning home to his mother and sister in Empire Bay – a fictional city based on both New York and San Francisco. Before being packed off as a solder, Vito got into trouble with his good buddy Joe, and the pair hook up on his return. Joe gives Vito a place to stay and a way to make a living without working a 9-5 job. It’s not a regular office role and it’s not legal, but Vito wants to make something of himself to help out his struggling family, hard up after the death of his father.

After falling in with the wrong crowd, Vito is given a string of quite menial jobs, initially for small cash but slowly for more sizable wads. You’ll be told to steal cars, sell ration stamps, beat people up and generally drive around… a lot. While you probably expect a game set in a large city to feature driving, in Mafia 2 it feels like you do it all the time. That wouldn’t be a bad thing if the missions you drove to were always thrilling, but actual gunplay is disappointingly rare. On top of that, the cops in Empire Bay are a little too good at spotting driving offences, so you’ll spend much of your time on the road having to evade pursuing cop cars.

As slow and tedious as the early part of the game is, there’s no denying 2K Czech has created a superb-looking title. The city has been expertly designed, packed full with detail, while the characters are all of a good enough quality to convey emotion through actions as well as words. The virtual performances aren’t quite up to par with Rockstar’s recent efforts, but the cast of criminals do an admirable job – even if they might play up to the stereotypes of mafia life a little too much. Prepare yourself for strong language too, as these guys don’t mince their words.

When you do get to play with guns the action is solid, but not exactly up there with the best third-person shooters. Aiming doesn’t feel as smooth as it could do and the snap-to-cover system feels a tad basic – there’s no vaulting over cover objects, for example. It’s also a shame that the AI of your enemies is rather all over the place. At times they’ll take part in fire-fights, taking cover when necessary, while at other points you’ll see them dash into each other and generally run around like headless chickens.

Early in the campaign Vito is caught by the fuzz and sent down for 10 years. What follows is an incredibly dull series of fights against various thugs in the slammer. Melee combat in Mafia 2 is far too basic. You dodge all attacks by holding down one button, and then counter by pressing another. A hard punch is also available, as is a brutal series of blows if you pick up your opponent after he’s been downed. So, fighting isn’t a great deal of fun, but these scraps get you on the good side of some high-ups in the prison, so you’re released earlier. The story then jumps to the early 1950s now, and while times have changed (the latter portion of Mafia 2 is brighter, and the soundtrack ever-so-slightly more modern), the gameplay merely moves from a four to a five on the excitement meter – and that’s out of 10.

Vito still has to perform far too many basic tasks, but the shoot-outs do increase and the story ramps up. Here, though, the game’s fairly mean checkpoint system does its best to annoy, forcing you to replay fairly large chunks of missions when you inevitably get shot in the face by a group of rival wiseguys. Mafia 2’s combat is at its best when the scale isn’t too large, with Vito and co moving through fairly tight environments, rather than the larger open areas packed full with enemies, but these don’t come around nearly often enough.

Despite 2K Czech’s stingy stance of action missions, somehow Mafia 2 isn’t the dud you might think. For one the story, while a bit clichéd, is one of the more involving plots I’ve played this year, and the characters are great. There’s nothing to do outside of the linear string of missions, but that does mean that you get an extremely focused game in which you follow Vito’s ascent to power.

Gameplay is king, but Mafia 2 earns itself a slightly easier ride thanks to the sumptuous visuals, which look quite wonderful even when the framerate is bogging down slightly on 360 and PS3. There are a few neat touches too, such as a car ride home during one mission in which your drunken passengers sing along to the tune on the radio. A bit more of this throughout the duller missions would have distracted from what you were actually doing.

Mafia 2 feels like a game that could have been great. Clunky controls are hardly game-breaking, and some might argue part and parcel with the open-world genre, but without the features associated with open-world games Mafia 2 is more easily compared to Uncharted and Gears of War – and in that circle it’s simply not action-packed enough. Vito’s rise might not be as littered with flashy set-pieces as I’d have liked, but by the end it’s a journey most people won’t begrudge making.

Mafia 2 feels like a game that could have been great. Vito's rise might not be as littered with flashy set-pieces as I'd have liked, but by the end it's a journey most people won't begrudge making.
7 Great visuals Good story and characters Not enough gun-play Too many menial tasks