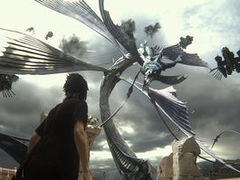 Final Fantasy 15 ‘quite far into development, given high priority’ by Square

Development on next-gen RPG Final Fantasy XV is coming along well, series producer Yoshinori Kitase has suggested, telling VideoGamer.com that the game is “quite far into development” and has been given a “very high priority” status by Square Enix.

“We can’t give too much information but certainly looking at Final Fantasy XV, it’s not as if it’s in competition with Kingdom Hearts 3 for resources or anything like that,” Kitase said when asked for an update on the two games earlier this week. “It’s quite far into development now and it is being given a very high priority within the company itself, but that doesn’t mean Kingdom Hearts isn’t.”

Both games were formally announced at E3 last year, with Final Fantasy XV having originally been revealed as Final Fantasy Versus XIII way back in 2006.

But despite the name change the story doesn’t appear to have seen too many alterations, with the game still “underpinned” by the same Fabulla Nova Crystallis mythology as the Final Fantasy XIII series.

“Right from the start when we first it announced it as Versus XIII, the game itself was backed up by the same Crystal legend: the Fabulla Nova Crystallis mythology that underpins the whole of the XIII series,” adds Kitase.

“So even though it’s not necessarily the same universe or the same game, they’re all linked and underpinned by the backdrop of that legend. Now it’s moved on – obviously the title’s been changed to Final Fantasy XV – but that hasn’t actually changed. The story and the world is still going to be linked and backed up by that. So yes, there is the link between XIII and XV, and they both share that mythology as a backdrop and a starting point.”

And while Kitase isn’t directly overseeing Final Fantasy XV or Kingdom Hearts 3, he also shared his thoughts on how the power of Xbox One and PS4 could improve future Final Fantasy titles, hinting at the possibility of larger battles and bigger parties.

“We are quite aware of [PS4 & Xbox One’s] capabilities and certainly one thing that’s going to come up is having battles with a lot more participants involved,” he continued. “Having a lot more characters, a lot more things happening, that’s one of the things that the new hardware does really well, so to maybe make a battle system for a Final Fantasy game or a future game that fits with that, I think it would be quite good to have more characters for the player to control and more participants in the battle.”

Rather than pour resources into developing an entirely new Battle System, Square may also adapt systems found in earlier Final Fantasy games for use in future titles.

“In a way there is stuff from the past that we’ve done in previous Final Fantasies that may come in handy, that we may adapt or reuse or recreate for a future [title],” Kitase continued.

“In the first two of the XIII series you had the Paradigm Shift system with AI controlled teammates which lends itself very well to having lots of characters. Or maybe having even deeper customisation, something that harks back to say the Gambit System in Final Fantasy XII. All those kind of ideas, it doesn’t necessarily [mean] that something that we’ve used before is now invalid and can’t be used, there’s certainly a possibility of taking it and bringing it back. But I think it’s going to be those kind of changes that the technology allows that we’re going to have to maybe think and adapt for.”