Fils-Aime would have ‘loved’ online play in NSMB Wii 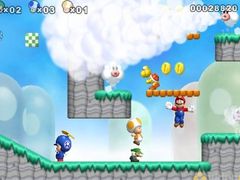 New Super Mario Bros. Wii is being praised for its multiplayer functionality, allowing four players to come together on one console for a new Mario platforming experience, but why doesn’t the game have online multiplayer? Nintendo of America president Reggie Fils-Aime says it was a decision made by the developers.

“This was a decision made purely by the developers,” Fils-Aime told Kotaku. “They believe this experience, in the same room, to be elbowing your friends and family members as you’re playing the game [is ideal]. It was really their decision.”

He added: “I personally would have loved for it to be online capable as well, but having played the game, I really can’t fault it for not being online multiplayer.”

Look out for our New Super Mario Bros. Wii review later this week.