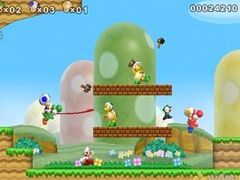 There is one significant stipulation in his claim: NSMB Wii will outsell single format MW2.

“Absolutely. I say that unequivocally. On one particular platform, I do believe so,” Fils-Aime told GTTV. “Now, you’ve got to give me the entire holiday selling season. Right? So let’s take it all the way through the January NPD data. Yes. I’ll put that stake in the ground.”