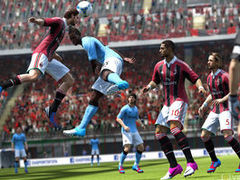 FIFA 14 for next-gen ‘signalled’ by EA

FIFA 14 is sure to ship for current generation platforms this autumn, but EA has also indicated the game will appear on next generation systems such as the PS4 and next Xbox.

“Beyond Q4, we see a bright light at the end of the tunnel. For EA, digital remains a winner, and our investments are generating strong growth. We’re also investing in Gen4 console technologies and content,” said EA CEO and executive director John S. Riccitiello during last night’s Q3 earnings call. “We’ve signalled that we’re working on the next editions of our two biggest franchises in Battlefield and FIFA. And we look forward to discussing these programs and many others with you when we provide our fiscal ’14 guidance in May.”

“We believe that FIFA and Battlefield have a shot at certainly remaining in the top 5, quite possibly being 1 and 2, if we’re successful as we move through the next technology transitions we see coming,” said Riccitiello. “We do recognize as we move into what we determine or call Gen3, i.e., PlayStation 3, Wii, Xbox 360, we started weak, and we climbed forward, improved, but we lost market share coming into this transition, we climbed back.

“We think Battlefield and FIFA are going to help us lead as we move into the next set of technology opportunities and platform opportunities, and continue to get bigger.”

EA’s faith in the FIFA franchise stems from the blockbuster performance of FIFA 13, which has now sold through more than 12 million units worldwide – an increase of 23 per cent over FIFA 12 at the same point last year.

FIFA 13 has also seen major growth in digital net revenue, up 98 per over FIFA 12 to over $100 million in the third quarter.

“I’ll start with FIFA, an EA franchise that has emerged as one of the world’s top two or three games. The EA SPORTS team in Vancouver is absolutely crushing it on every format and in every market. Since FIFA 13 launched in September, we’ve sold through more than 12 million units. And in Europe, FIFA 13 was the #1 title in 2012, outselling all other games, including Call of Duty,” said COO Peter Moore.

“The digital performance for this franchise is particularly impressive. The number of gamers that actually play FIFA Ultimate Team grew 61% over last year’s offering. Additionally, the average revenue per paying user increased by approximately 30%. Both of these increases contributed to FIFA Ultimate Team revenue being up 136% year-over-year, and the holiday delivered the largest revenue day in the history of the service.”