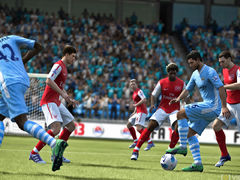 EA has finally unveiled FIFA 13, and at a recent press event, we caught up with lead producer David Rutter. Amongst the discussion of new gameplay features, the brilliance of Messi, and the consideration of diving, EA’s very own Sepp Blatter revealed he favours change far more than FIFA’s mind boggling figurehead.

Q: Last year you focused on improving the defensive side of the game. This year, it all seems to be about attack. Was this something you planned?

David Rutter: So, I think we did a lot of work last year. We totally ripped out defending and put a new style in. With tactical defending, it really made people spend a bit of time defending, rather than just pressing a button and launching defenders up the pitch, which was obviously the right thing to do, because there was no defending before that.

There was a small amount of work we did with precision dribbling, which kind of helped with attacking and certainly freed up moves. Being able to get to places on the pitch and do things with the ball you weren’t able to before it. I know you went from having to break down defences with passing and small movements to actually being able to take mazy runs into the box and sometimes score, which you couldn’t really have done in previous FIFA’s, so that was great.

This year, what we wanted to do was create a game that had the excitement and thrills of world football in a sense of its unpredictability. By unpredictability we don’t mean random, we mean you’re never quite sure what’s going to happen next.

And you know, with the tactical free kick system and the one touch control in particular, we’re making that happen. But then, from an attacking perspective the complete dribbling, the new AI supporting runs, and to a degree your ability to influence first touch as a defender or a player running alongside and behind someone. Being able to push-pull them and unsettle them. Those sorts of things all combine in the battle for possession and creativity in attack, combining together to create a very balanced, rounded gameplay experience where there’s both new defending mechanics and new attacking mechanics, but both of them go together to create this really nice game.

Q: Did you outline a two or three year plan to pull all of these mechanics together? Would you say the defending side of the game is fully in place now?

Defending probably not. The way we work it is we’ve got a good idea of where we’re going, and we have a massive laundry list of features that we’ll never get to, for years and years to come.

But it’s pretty audacious calling the new dribbling ‘Complete Dribbling’. We think we’re done on dribbling. We think! Because everything we wanted to do, directions, distance and face angles are now done, we’re not really aware of anything else we need to get to at the moment.

Q: Would you say your new implementations evolve alongside real world football?

DR: Yeah, I think there’s some things that do and some things that don’t. So naturally, that lateral movement with the ball has always been there, it’s just a case of “Okay we need to do this, we need to do that, okay, what are we missing?” And then, you spend a lot of time watching football and some things, like 360 degree dribbling, didn’t exist. “So okay, what is it we’re trying to do here? Okay, it’s the face angle that we need to get right, and that’s just by watching lots of football.”

Q: Do you think for the first time, players such as Messi and Ronaldo are going to be outlined as the greats they actually are? In FIFA 12 they felt instantly better than the rest, but never comparatively as good they are in real life.

DR: Yeah, I do believe that. But not to the extent that they’re superhuman. The whole idea behind the push-pull is, if you’re playing as Messi, if you watch Messi every match, he’s just pushed and pulled every where, because everyone wants him off the ball, and they know they can’t catch him and they’re probably not going to be able to dispossess him. So he’s developed a way of kinda stumbling around with the ball that looks ingenious. So we have that system now in the game too, which is great. We can create Messi as he truly is.

The way that Cristiano Ronaldo controls the ball in close quarters, and chops and changes directions rapidly when he’s facing off against someone, we’ve sort of had that in the past, but not to the extent that you can actually keep moving whilst doing it. You’d always have to stand totally still.

So it’s natural to get to the things we’re trying to do, same as you know, you look at our free kick system, we’ve always had the ability to take some amazing shots on goal, but we’ve not really had the ability to have players run over the ball before, and to add people to the wall or do any of those kind of things. It’s a long list! [laughs]

Q: The close ball control of FIFA 13 is very similar to FIFA Street, is that something you took inspiration from?

DR: We’ve always had the skill moves, the kind of static skill moves, but what we haven’t really had is the ability to break out of those in an engaging and rewarding way. FIFA Street did an amazing job, I mean, their kind of hard stop control is phenomenal and they’ve done an amazing job with that. So we were taking inspiration from that, and then working it into a simulation football game, rather than an arcade football game which is what FIFA Street was. We can’t do it exactly the same because it’d just break the experience.

Q: If these additions have dribbling fully sorted, what about players such as Xavi and Paul Scholes- players who have vision that can hit any side of the pitch? Has there been any thought on outlining master passers of the ball?

DR: Totally! So last year with personality plus we had that, we introduced the concept of vision which I think worked really well. I think the idea was that your team mates last year could kind of spot what your attributes were and try to support you in that.

So, if you’re Peter Crouch: he runs into the box, kind of stands there hoping to either nod the ball onwards or down to someone to try and do something with it. The team would know that and play balls to Crouch’s head.

Now, knowing that, the AI has a suite of attacking intelligence it can tap into to be able to do mazy runs or get in behind, or stay onside, you always see that. When a player starts to do that the rest of the team understands what’s going on and support that, meaning the players that have great vision and can play those balls have a range of options to do so.

Going right back to the beginning, when you think about what unpredictability is, that’s what we’re trying to get to. Where you’re never quite sure what’s going to happen next. But when it happens it’s happening in a very realistic way. Not random! Random- bad! Bad random!

DR: We’ve been conscious of it in the past. So for tactical defending we have the toggle, you can switch it on or off, it’s up to you. Turns out 93% of people like it, I would have thought it would have been less, because I think for more casual fans and people who started the game later, it’s a very high percentage.

It makes us all feel kinda happy, because it’s what we wanted to do. We wanted to create a game that, whilst it might be challenging, there’s reward. But at the same time, what we’re doing is mimicking real life to create these engaging systems that make you have to think about what you’re doing. I don’t want a mindless game. I think saying it’s hard or challenging, or it’s going to put new players off is almost making out that people are stupid. They’re not. If they’re buying the game, nine times out of ten it’s because they’re football fans, and they watch football or they play football, they love football, what we’re doing is creating football systems.

We’re not creating something otherworldly, so people get what we’re doing, even if we’re not telling them what it is. And yes, sometimes our game can be kinda hard, particularly at a harder level, but I think for the vast majority of people they’re playing it and enjoying it. They understand why, because it’s predictably unpredictable, if that makes sense.

Q: Right now there’s a huge debate about diving in football, have you ever considered having it in the game?

DR: We do, every year we talk about it, and every year we kinda decide not to. That’s for a bunch of reasons, mostly around the fact we get enough trouble with quitters online, and people trying to cheat in one shape or other, without actually putting in features that would help.

Q: If you were to implement it, would it be similar to the random handballs, or a skill-based mechanic?

Philosophically, I don’t know, because we are pretty much opposed to putting it in at the moment. Until we’ve spent enough time figuring it out, same as handballs, it took us a long time to get to the point of putting handballs in, and we’re still not happy with it, which is why it’s off by default. We can’t tell whether or not you’ve deliberately done it. The nuance of handball is did you deliberately do it? Did someone kick the ball at your hand, or did your hand move to the ball? You have no control over that in the game, and you think the controls can be difficult enough now, if we put hand control in there too- Kinect and that-I’m not quite sure how it’d work.